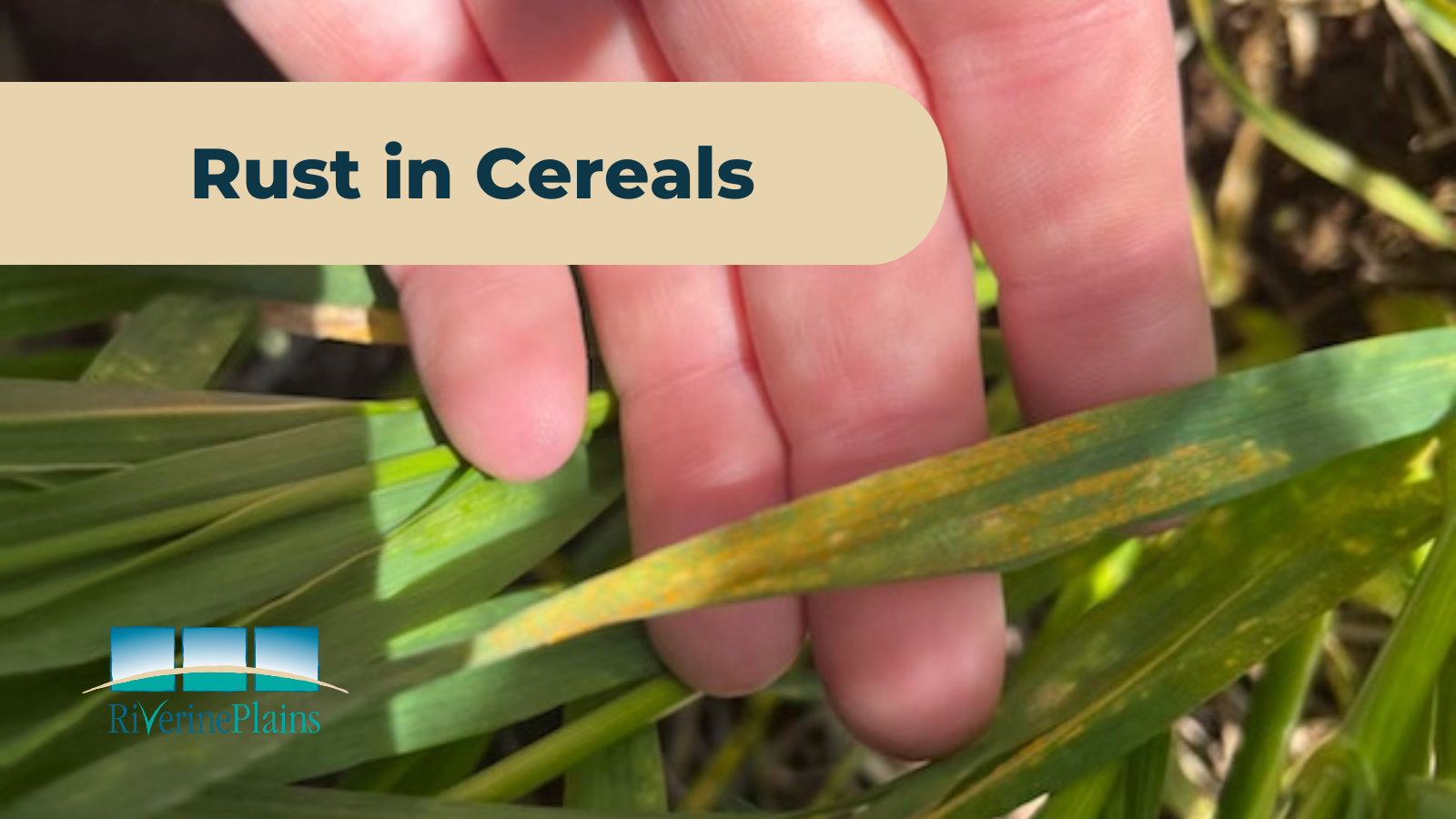 Given early disease build up in areas of NSW and Victoria, ongoing wet conditions and the widespread planting of susceptible cultivars, Riverine Plains region growers are encouraged to inspect crops now for signs of rust and other cereal diseases.

Monitoring and managing infections will be especially important for preventing yield loss in late-sown crops coming under pressure from early infections, as well as in susceptible varieties.

Has your rust rating changed?

Rust pathotypes can mutate to overcome the genetic resistance of cereal varieties. The rust strains in circulation can also change from year to year so that in some seasons, one strain of rust will dominate, while in other seasons several strains might be circulating. This affects the response of a given variety, which may be susceptible to one strain but not another. For this reason, it’s important to check the resistance rating of your cereal each season; updated ratings can be found at  https://agriculture.vic.gov.au/biosecurity/plant-diseases/grain-pulses-and-cereal-diseases/cereal-disease-guide or https://www.dpi.nsw.gov.au/agriculture/broadacre-crops/guides/publications/winter-crop-variety-sowing-guide .

Dense cereal crop canopies and ongoing wet conditions across much of the Riverine Plains means that the risk of damage from cereal rusts (stripe, leaf and stem rust) in susceptible varieties is high. The Australian Cereal Rust Survey has received reports of both leaf and stripe rust in the region (sometimes the different types can be tricky to tell apart so it helps to check first thing in the morning; stripe rust will be a distinctive yellow, leaf rust will be an orange-brown and stem rust will be a reddish brown compared to later in the day).

Rust infection requires high humidity for 4 – 6 hours at 10 –15°C, with more time required for infection at lower and higher temperatures, so susceptible crops will likely have been exposed to multiple infection events over recent weeks. Remember that for varieties with adult plant resistance, a common response to infection is yellowing or necrosis around the site where the rust spore landed (this is how the plant kills/slows the infection).

It’s important to consider of the optimal timing of fungicide applications, especially if cereals are now getting close to flag leaf emergence.

The decision on whether to apply foliar fungicide should be economic and will depend on the resistance rating of a cultivar, disease pressure and prevailing seasonal conditions. Consider that the leaves targeted for protection should be those that contribute most to yield (yield is generated primarily by the top 3-4 leaves, with the flag leaf the most important, and the flag minus 3 leaf the least important).

The StripeRustWM App can be used to help make decisions about fungicide application timings.

When planning foliar fungicide applications, also remember to rotate your chemical group to avoid accelerating the development of fungicide resistance (remembering that seed and fertiliser fungicide dressings count towards your in-crop applications).

Monitor crops for signs of rust infection now and consult your agronomist to determine if a fungicide application strategy will provide an economic response in your crop.

After two years of above-average rainfall, slugs are again making their presence known across the Riverine Plains, especially in canola. The moist conditions experienced...